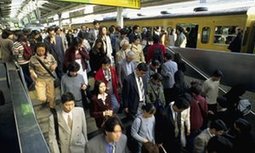 Read the full article at: www.theguardian.com

I heard this once described as the first example of a demise of a modern advanced economy. A macro trend to watch as falling birth rates are prevalent in Europe and large parts of East Asia meaning the servicing of (now unprecedented) debt falls on fewer and fewer workers. There is a counter argument that this will spark innovation in terms of AI performing a lot of processing and manual tasks. I guess we shouldnt underestimate the ability of humans to innovate.